July 2020 Morocco. M’Hamid Oasis. Halim Sbai has experienced his childhood oasis being covered with sand because of desertification. Visiting Nomads of Sahara he comes up with an idea to win over the Sahara.http://

Video of Oum’s Taragalte song.
Look close and you will see our trees, GROASIS waterboxx’s and Ilham and me as well.
So cool! Many thanks to Oum.

Wanda of Sahara Roots Foundation is interviewed during Tagaralte Festval 2012

Documentary by Basil Schweri from Bern, Germany (www.caminovie.info)
Piece by piece, the Sahara is spreading, the last oasis in M’Hamid (Morocco) has also been severely affected. Trees are a natural protection against the “devastation” of the oasis.

The Sahara-Roots Foundation was founded in 2008 to help create awareness amongst the population in the area of the M’hamid village in the South of Morocco, about the importance of maintaining their beautiful environment. 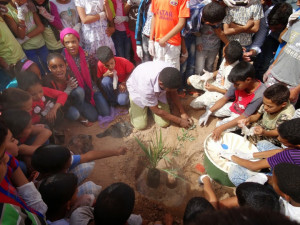