The Sahara-Roots Foundation was founded in 2008 to help create awareness amongst the population in the area of the M’hamid village in the South of Morocco, about the importance of maintaining their beautiful environment. The activities are focussed on planting trees against desertification, assisting in clean-up campaigns and in stimulating the local school children by distributing and reading Wanda Hebly’s own-designed booklet “Me and my Sahara” in the French/Arabic language, in co-operation with local associations.
Between 2008 and 2015 Sahara Roots has participated in more than 16 tree planting and environmental educational activities together with different primary and high schools in M’hamid, Zagora and Ouarzazate. We have helped with the organization and have participated in Earth day activities as well as Taragalte Festivals. We have also had several meetings with government officials so as to get their support and to be able to engage with the local schools and people. We have been on Moroccan National TV on the following programmes to help create awareness on environmental issues :
Al Mouja   and  2M:

Sahara Roots is a family foundation. The president/founder is Wanda Hebly, the vice-president is Richard Hebly, the secretary is Wendelien Hebly, the treasurer is Adriaan Hebly en Laurens Hebly is responsible for communication, marketing and design.

About Wanda Hebly, founder of Sahara Roots
Since 1998 Wanda has worked as a tour guide during hiking and culture trips in the deserts of Jordan as well as Morocco. Her interest in desert areas was awakened during a five-year stay in the Middle East. Wanda loves to share her passion for the desert areas of Morocco and Jordan, as well as their inhabitants and their different cultures during these trips. Wanda works part-time for Valerius Reizen in Amsterdam.
Since 2007 Wanda has been working closely together with- and accompanied to Morocco by her friend and Arabic teacher Ilham Attar-Bakal of Noor Translations (+31-(0)35-6213681). Ilham has been (and still is) instrumental in bridging the communication between the local people and us and she is energizing our initiative tremendously! Ilham works as a translator for the Media and various Governmental organizations in The Netherlands. Her languages are Dutch, English, Arabic, Koerdi(Sorani) and Turkmeens. .

Goals of the Sahara Roots Foundation 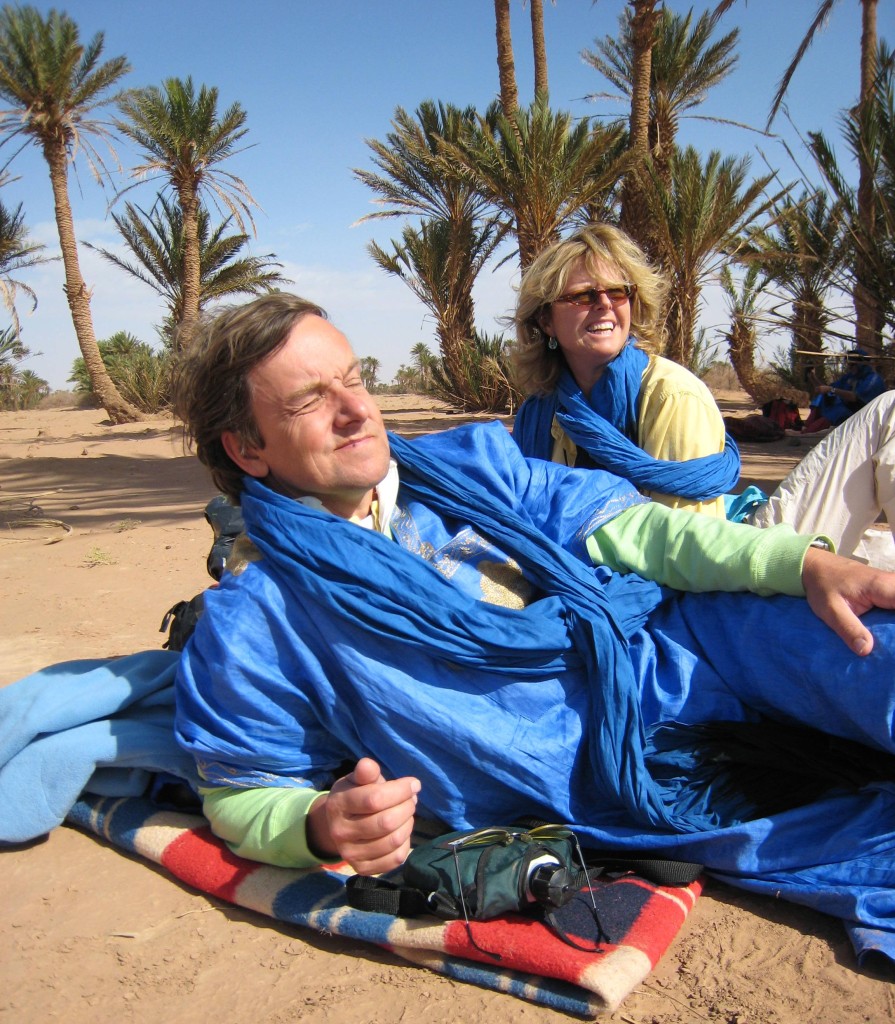 Family Sbaï
In January 2003 Wanda met the family Sbaï and was impressed by their dedication towards the people and the area of M’hamid El Ghizlane. During the years to follow Wanda learned more about the history, culture and nature of this area. Halim en Ibrahim Sbaï told fascinating stories about the long caravan journeys of their ancestors between Mali, Mauritania en Morocco and Wanda realised that again another way of life was lost.

L’Association Zaila
“L’Association Zaila” is an initiatief of the family Sbaï and others from the area of M’hamid. The family Sbaï help to keep the memories of the past alive for future generations as well as actively working on sustainable development projects in this area so as to help find a balance between life in the Sahara as well as the influences of the modern world as it is today.

—-
Registered with the Chamber of Commerce in Hilversum, the Netherlands,
under number 32135287 Sahara-Roots Foundation

The bank account number of the Sahara-Roots Foundation is:
Stichting Sahara-Roots in Hilversum, the Netherlands
IBAN: NL94RABO0143475525
BIC: RABONL2U